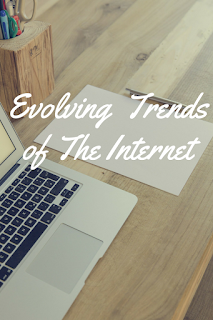 The Evolving Trend of Internet Revolution

Just over two decades ago, who could have imagined how life would have turned around in just 20 years? Who’d have thought that today, it would be possible to send emails around the globe in an instant? Or that it would be possible for a businessman in London to call a meeting of several associates – one in Hong Kong, one in Sydney and one in New York? And that each one could speak to another as clearly as if they were all in the same room? Did we ever imagine that it would be possible for friends living on opposite sides of the planet to speak every day at minimal cost? And that people who’ve never met could befriend each other?

The World Wide Web as we know it was born on the 6th August 1991. It’s difficult to remember how things were before.  As a kid, I imagined how the future would be. I’d visions of being woken in the morning by robots bringing tea and eating meals composed of vitamin pills. I imagined communicating with the boss at work through a television screen. This vision probably seemed fantastic back then, but it looks silly now. Why use a robot to bring your tea? They’re building vehicles on factory assembly lines. And eating food substitute pills? We might take the odd supplement sometimes, but we still eat real food. With ingredients from quinoa to tofu available, our diets can be exciting. Talking to the boss on a television screen isn’t unusual. That’s a Skype call. He’s probably client rather than boss, though. There are more freelancers since the Internet. We have communication tools like email and payment tools like PayPal. In the eighties, writer Alvin Toffler, in ‘The Third Wave’ predicted the ‘electronic cottage’, where someone would live and work in one place, communicating with colleagues through a computer.

The Explosion Of Social Media

Facebook was founded in 2004 by Harvard student Mark Zuckerberg and some roommates. It was limited to fellow Harvard students. It’s a worlwide platform now, with over a billion active users per month. Sign up giving your name, photo, email address and a few basic details and you’re good to go. Then reach out to other users. Though many countries and regions have their local versions, the original social network is the most popular. In Facebook, you can write something for the world to see (or just your friends). You can also have one-to-one chatting and group chatting. There are private groups for discussion and hobbies.  Readers groups might read a book together and discuss its merits and aspects.You can have a page to promote your club or business, showing activities and photos. Twitter is a platform where you can release micro posts (140 characters) recommending products or services or even a good book or article to read. Another tool is Pinterest. You can share articles on any topic and it’s a mine of information. Instagram is a photo sharing network, very popular with teenagers and others. There’s Snapchat, a video-call platform, where people video chat and embellish their images. There’s WhatsApp, where people connect through their telephone numbers, chatting one-to-one or in groups.

For  people wishing to be published,  blogging is a dream come true. Get a free blogsite on blogger.com or wordpress.com and work away. Readers cn comment on posts. Having lots of comments is a matter of pride. Many bloggers visit other bloggers and commented on their posts to get return comments. There’s almost no limit to what a blogger can publish. Articles, short stories, even novels. Blogsites were often plain, unattractive pages, with basic design, featuring unrelieved pieces of text. But now, blogging has gone professional. A good blog makes money. A well-written, well-presented blog can be a nice side hustle for its owner. Some blogs  make a full-time income. Mexico-based,  USA-born Jon Morrow, author of Smartblogger , can prove this. Harsh Agarwal from India, earns a good living from his blog, ShoutMeLoud. But these guys spend time and money to make their blogs professional, with quality content. A good blog is really an online magazine with valuable, helpful content.

When you sign up for Facebook, you can give your name as Donald Trump. The name and the photograph you supply will be accepted. People probably know it’s a fake account, but they’ll have no way of proving it. People will interact with you and some of them may even think you’re the President of the United States. There are thousands of fake accounts on Facebook. Men and women regularly fall in love with someone they think is 25 and devastatingly good-looking and by the time they’ve committed money to the relationship, the person has absconded with the booty. Have you heard of the father of five who left his wife and kids for a beautiful woman in Australia? He went to meet his beloved and discovered she was older than him, with an obesity problem and several teeth missing.

When we visit a website, we leave digital footprints. Ever checked out shoe styles online and then wondered why shoe ads keep following you around? Ever heard about the professor who was teaching a class in medical college?. He Googled a particular term when his computer screen was visible to the class. Embarrassingly, links to what might be called x-rated sites appeared in his Google SERPS. This user regularly Googled hot content in his downtime. His preference was publicly displayed and how shaming is that? Sometimes, people are stalked online. If stalkers see your profile picture and you accept their friend request, they can give you trouble. Stalking is a crime and it’s no less dangerous in the cyber world.  Cyber crime is growing, with various online scams happening in different parts of the globe. Many banks won’t give account numbers out by email for fear of hacking.

Some Thoughts On The Future

Initially, computers were required for internet access. Now, smartphones can do the job. Meanwhile, the tablet evolved, a type of smartphone/laptop combination. Even more sophisticated is the smartwatch. This is basically a wearable computer, even running mobile apps. There are endless possibilities for the evolution of internet devices. It will be interesting to see what manifestations appear in the future.